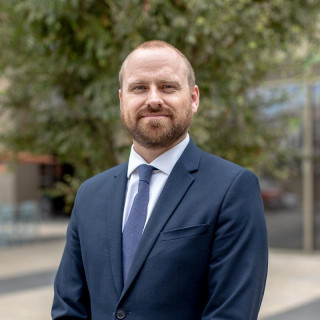 Aaron M. Olsen is a partner in the employment law and complex consumer litigation departments of Haeggquist & Eck.

Aaron has resolved hundreds of individual labor and employment law cases on behalf of employees. He has recovered millions of dollars in damages. Notably, Aaron was on the trial team in a unique associational disability discrimination matter against Kaiser Permanente that resulted in one of the top 50 largest labor and employment verdicts in California in 2017 on TopVerdict.com.

Aaron has served as co-lead counsel prosecuting class action suits, including consumer fraud actions, product defect cases, wage and hour actions, and unfair competition and false advertising claims. He has successfully litigated against major corporations such as Apple, Sony, AT&T and UFC, and served as co-lead counsel on a team that negotiated a $25 million settlement on behalf of students who attended (now U.S. President) Donald Trump’s infamous Trump University.

Aaron is currently local counsel for two groups of immigrant parents and children separated at the Mexican border under the United States government’s “zero tolerance” immigration policy. He is also serving as local counsel in a case seeking to uphold The Information Quality Act to ensure government agencies properly disseminate information about immigrants. Aaron has also dedicated much of his time to charitable organizations throughout San Diego.

Aaron has been selected to the California Super Lawyers List every year since 2015, an accolade given to only a small percent of attorneys in Southern California, and his written work has appeared in the California State Bar Litigation Review and San Diego Lawyer.

Aaron grew up ski racing and competing in downhill mountain bike venues across the country. This competitive drive drew Aaron to triathlons, with him completing his first 140.6-mile Ironman triathlon in 2015. Aaron’s true passion these days is spending time with his wife and two kids.

Aaron M. Olsen is a partner in the employment law and complex consumer litigation departments of Haeggquist & Eck. Aaron has resolved hundreds of individual labor and employment law cases...

What Constitutes a Disability in the Workplace? | Haeggquist & Eck