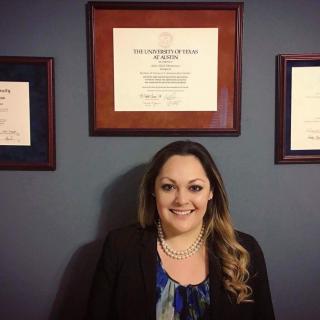 Aida was born in Matamoros, Mexico and came to the US with her family at the age of 4. She attended the public school system in Brownsville and graduated in the Top 5% of her 2006 graduating class at Porter High School. After high school, Aida attended the University of Texas at Austin where she graduated in 3 years with her Bachelor’s in Communication Studies-Political Communications. In 2009, Aida began law school at St. Mary’s University School of Law in San Antonio, Texas, where she simultaneously received her Master’s Degree in International Relations-Security Policy and National Security Issues. While in law school, Aida was a research fellow at the Center for Terrorism Law and a teaching assistant with the Civil Justice Clinic. Aida also clerked with the Honorable U.S. District Judge Hilda G. Tagle and the U.S. Attorney's Office in the Southern District of Texas. Aida received several awards while at St. Mary’s Law including the Pro Bono Service Award, Dean’s Scholarship, Blask Fellowship, and the Henry B. Gonzalez Outstanding Achievement Award, awarded to one St. Mary’s Law Student by the Hispanic Law Alumni Association. Aida began her legal career as a prosecutor at the Cameron County District Attorney's Office, ultimately becoming the head of their Domestic Violence Unit. As a result, Aida developed a passion for advocacy and currently sits on the Executive Board of Directors for Friendship of Women, a local battered women's shelter, and on the Board of Directors for the Cameron County Child Advocacy Center-Maggie and Monica’s House. Aida then decided she needed to learn civil law to become a well-rounded attorney and joined a local civil law firm in 2014 where she specialized in medical malpractice litigation. After 2 years at the civil firm, and after 4 years of having received her law license, Aida decided it was time to branch out on her own and opened her law practice in Brownsville, the Montanaro-Flores Law Firm.