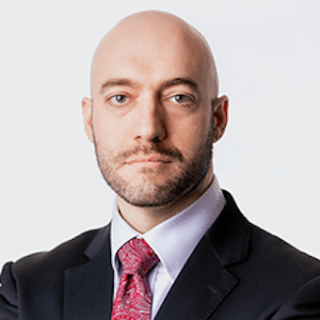 Alexander Loftus specializes in litigating business, intellectual property, commercial, employment, and class action cases and is passionate about fighting for the little guy in a failed business transaction.

Alexander is a member of the Small Business Advisory Counsel, Illinois State Bar Association, and Illinois Trial Lawyer’s Association. In 2013-2020 Alexander was named a Rising Star by Law and Politics and the publishers of the Chicago Magazine, a distinction given to no more than 2.5% of attorneys in the State of Illinois. In 2013 Alexander was included in the Top 40 Trial Lawyers under 40 by the National Trial Lawyers Association and rated “Superb” by AVVO an objective physician and attorney rating agency.

Alexander grew up in a small town in Southern Wisconsin loves taking his kids fishing there in the summers. He went to college in Saint Paul, Minnesota and Washington, D.C where he studied Political Science and was a member of Pi Sigma Alpha (national political science honor society). While studying at American University Alexander held his first legal position as an investigator for Mental Health Division of Public Defender Service for the District of Columbia. He went on to work for the general counsel of 3M.

Proceed with Caution: Taking Plaintiffs' Cases With You When Leaving a Law Firm
The Sidebar (AAJ)
2017

Ones to Watch in Intellectual Property
Acquisition International
2017