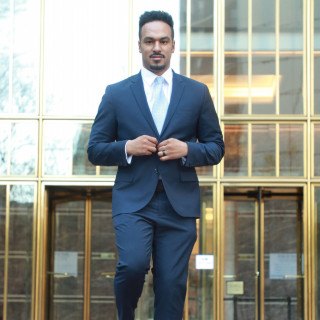 I am the owner of The Lacy Employment Law firm, LLC, which specializes in worker's rights as well as civil rights. Prior to opening my law firm, I worked for one of the largest international law firms in the world.

I also took a sabbatical from large law firm life to complete a clerkship with the Honorable Cathy Bissoon in the United States District Court for the Western District of Pennsylvania.

I tried my first federal jury trial to verdict at age 26. With that victory, I became one of the youngest lawyers to win a federal civil rights trial.

During my career, I have taken dozens of depositions, tried multiple cases to verdict, and have handled appeals.

The skills I learned while working at a large international law firm (“Biglaw”), help me do just that.

I am a graduate of Cornell Law School. There, I was on the Dean’s List my first semester, an honor given to the top 30% of the class.

I also served as the academic advisor in the Black Law Student Association (BLSA).

Pennsylvania
Disciplinary Board of the Supreme Court of Pennsylvania
ID Number: 321232
Since 2015

Q. I'm in PA where wire tapping laws are 2 party consent. Can an employer use software/technology to record me?
February 2, 2021
A: This is not legal advice, just general information. But you are right, that PA is a two-party consent state making any unconsented recording illegal. This question, however, is whether you consented. In many employment contracts/handbooks, there is fine language giving an employer your consent to monitor you while at work. This could potentially include recording you. So, this would depend on the language in your employment agreement. But there are privacy laws that create a cause of action for invasive practices. You could have a civil suit after the fact for invasion of privacy. In the employment context, courts look to the reasonableness of the employer's actions. Recording you in the bathroom is definitely an invasion. Going through your desk drawer pursuant to an investigation likely is not. Unfortunately, you need to talk to a lawyer to get specific advice on your situation.

Q. I called an hour before my shift started to say that I couldn't make it and they are treating it as a no call no show.
February 2, 2021
A: Yes, they can treat it as a no call, no show. Technically, employers have broad disrection with respect to their employment practices. Employment is at-will, and they can fire you for any non-illegal reason. Where an employer would start to get in trouble would be a situation where it did not treat every no call no show the same. For example, if you are African-American and your no call no show was treated differently than a white person, you would have a potential employment action.