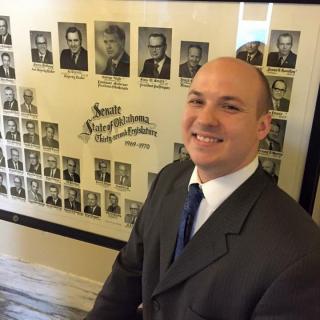 Andrew “Andy” Casey joined Stinnett Law as an Associate Attorney in January 2016. While attending the University of Oklahoma College of Law, he served as the Articles Development Editor for the American Indian Law Review, an officer for the Board of Advocates, and competed in the National NALSA Moot Court Championship. During his 2L year, Andy earned the title of Top Speaker/Best Oral Advocate in the country for the 2014 National NALSA Moot Court Championship. An Oklahoma native, Andy grew up in the Sand Springs/Sapulpa area before graduating from Jenks High School in 2004. In 2009, he graduated with a Bachelors Degree in Political Science from the University of Central Oklahoma. While completing his degree, Andy received several awards as a nationally competitive policy debater including being named an All-American as well as advancing into deep elimination rounds at several national debate tournaments. By nature, Andy is a fierce competitor who never lost the drive to out-research and out-work his opponents; he brings that charisma to all of Stinnett Law’s cases. Law was not Andy’s first career, he began as a debate coach at the University of North Texas in Denton, TX and Heritage Hall in Oklahoma City. For over four years, Andy specialized in conducting policy and legal research while being able to convey his research to high school and college students. To this day, one of the greatest skills he has honed is the ability to break complex legal theories down into practical and easy-to-understand ideas. As a loving father and a lucky fiance, Andy brings dedication to every client centered around in-depth research and a passion for writing.