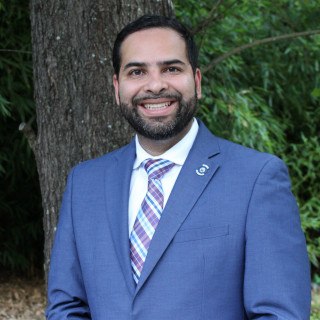 Antonio Molina is a Navy Veteran. After leaving the military Antonio went through a complete career change and began working in the health care industry, working his way up to eventually becoming the Chief Operating Officer for Consultorio Medico Hispano, a family medical practice geared towards helping the uninsured or underinsured community of Metro Atlanta. Antonio obtained his Bachelor's degree from Emory University, and his Juris Doctorate from Georgia State University College of Law, all while still working for Consultorio Medico Hispano. Since passing the Bar Antonio has been working as an attorney at the Heidari Power Law Group, a corporate law firm focused on litigation, transactional law, and compliance work, and Of Counsel for D’Aurio Law, a personal injury firm.
Through the years, Antonio has served in various capacities for numerous non-profit organizations, governmental agencies, school boards, and was the Chief of Staff for State Representative Pedro Marin from 2013 to 2019. Additionally, Antonio is the current Chair-Elect for the Georgia Hispanic Chamber of Commerce and is an at large for the Latino Community Fund and the Georgia Independent College Association.
For all of his contributions, Antonio has been recognized with the GPC Alumnus of the Year Award in 2014, named as Georgia Trend Magazine’s 40 under 40 in 2015, selected as one of the 40 under 40 by the Atlanta Business Chronicle in 2018, selected as one of the 40 under 40 by Georgia State University in 2020, and was the recipient of the Community Champion Award by Congressman Hank Johnson. Antonio is also the founder of the prestigious 50 Most Influential Latinos Awards which recognizes and brings in all the top Hispanic leaders throughout the state. While most people do not know where he gets the time to do all these things, Antonio credits his military training, his family’s support, and most importantly God’s blessing for his success.

Attorney at Law
Heidari Power Law Group
2019 - Current
At Heidari Power, we are lawyers located in Atlanta, Georgia, that take the legal profession seriously. We recognize that the law is important and serves as a fundamental cornerstone of civil society. It can serve as a shield, to protect you when inequity strikes, or as a sword to puncture through injustice. We are committed to providing outstanding representation and zealous advocacy. You can call us before a transaction, to help ensure that no problems arise, or call us after something goes wrong so that we can fix it. Whether you are a single individual or a publicly traded international corporation, Heidari Power can provide exceptional legal services, and we will tailor our services to meet your needs. Our firm handles cases in Civil Litigation, Business/ Corporate Law, Intellectual Property, Contracts, Administrative Law, and Transactional Law.

Of Counsel
D'Aurio Law
2019 - Current
Having worked in the healthcare field for over a decade, I have gathered extensive and expansive knowledge in the treatment and care that patients require after an accident. My experience clerking in state court and practicing business law also serves to provide me an essential perspective in the process of defending my client’s rights and ensuring that they receive the proper compensation for their injuries.

Georgia Hispanic Chamber of Commerce
Chair-Elect
2014 - Current
Activities: Established in 1984, the GHCC’s primary focus is on business formation, business growth, and civic and leadership development and engagement. It serves entrepreneurs and business owners through consultations, workshops and seminars, and partners with organizations such as the Small Business Development Center to bring quality programming to the Hispanic business community. With over 1,000 members, the GHCC is one of the largest Hispanic Chambers in the United States.

Georgia
State Bar of Georgia
Since 2018