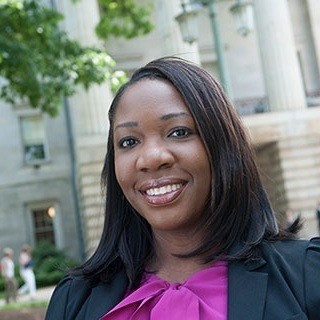 Benita N. Jones is originally from eastern North Carolina. She attended magnet schools in Raleigh and graduated from the North Carolina School of Science and Mathematics in Durham. She holds a Bachelor of Arts degree from Yale University, where she graduated magna cum laude, and a Juris Doctorate from Georgetown University Law Center in Washington, DC. Ms. Jones is admitted to practice law in North Carolina and Virginia and before the United States District Court for the Eastern, Middle and Western Districts of North Carolina. Her practice includes representation of public schools and other educational institutions. She is a member of the North Carolina Bar Association and the American Bar Association. Prior to joining Tharrington Smith, L.L.P. in September 2011, Ms. Jones completed a two-year Education Law fellowship at the University of North Carolina School of Law, where she worked directly with client communities to promote equality of education in school districts throughout North Carolina. She has provided legal counsel to developers and housing authorities sponsoring affordable housing projects as an attorney with Klein Hornig, L.L.P. in Washington, DC. While in law school, Ms. Jones was a student attorney in Georgetown's Harrison Institute for Housing and Community Development, where she designed and co-taught a nine-week Entrepreneurship Training Class, Personal Finance Management Seminars and a Negotiations Workshop for low-income homeowners. She also served as a Legal Research and Writing Fellow and a Senior Writing Fellow. Ms. Jones was a Dean's Scholar, an ABA Business Law Scholar, a NAACP Legal Defense Fund Earl Warren Scholar, and received the International Academy of Trial Lawyers Student Advocacy Award. Ms. Jones is an avid musician. She performs regularly as a classical and gospel violinist and enjoys sharing the gift of music through teaching.