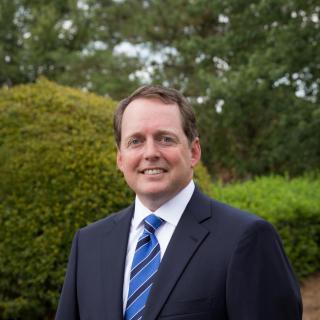 Blaine graduated from Carrollton High School and then attended Vanderbilt University ('90 to '92), before transferring to The University of Georgia, where he received a BA in history, magna cum laude, in 1994. At UGA he was Phi Beta Kappa and a Presidential Scholar (maintaining a 4.0 GPA while at UGA). He received his JD from The University of Georgia School of Law, magna cum laude in 1997. In law school, he was a member of the mock trial board and won four first place trial awards, including the national championship (ATLA) in Denver, CO. He was Order of the Coif (academics), Order of the Barristers (advocacy), president of the Christian Legal Society, voted by his classmates to receive the William King Meadow Award at graduation. He began his law practice at Alston & Bird in Atlanta and returned to Athens as a prosecutor to raise his family in the town he grew to love while attending UGA.As a prosecutor, he tried numerous jury trials before returning to private practice in August 2000. He focuses on personal injury litigation, auto, truck, and motorcycle accidents, and other injury cases. Blaine's past or present associations include the Georgia Bar Association; the Western Judicial Circuit Bar Association (Board of Governors 2007-2008; President 2011-2012); American Association of Justice; Georgia Trial Lawyers Association; and, Georgia Association of Criminal Defense Lawyers. Locally, he is an active member of Redeemer Presbyterian Church and has served on the Board of Directors for Diakonia Legal Services, Inc.

The University of Georgia School of Law
J.D.
1997