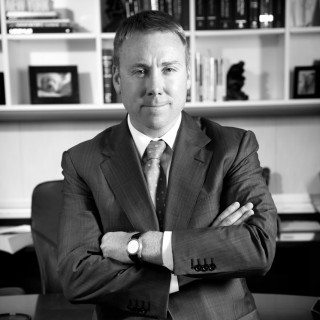 Bradley P. Koffel is currently one of the Top 50 lawyers in Columbus (Ohio Super Lawyers) and is one of only three lawyers in Ohio listed in "Best Lawyers in America" for DUI / OVI. He has also been awarded the highest rating by Martindale-Hubbell.

He practices all across Ohio defending individuals charged with alcohol and drug offenses, serious vehicular crimes, sex abuse allegations and sex offenses, white collar crimes, and more. Mr. Koffel has a winning record in numerous jury trials and bench trials since he started his practice in 1993. He has tried cases in every county of greater Central Ohio and argued appeals in 1/3 of the appellate courts of Ohio.

Every year since his third year in practice, Mr. Koffel has lectured and presented at Continuing Legal Education (CLE) Seminars for defense lawyers, prosecutors, and judges in Ohio. He has spoken at CLE seminars in Cleveland, Cincinnati, Dayton, Akron-Canton, and Columbus.

Mr. Koffel has significant experience in representing high-profile individuals charged with DUI, drug / alcohol crimes, and non-violent felonies, as well as the personal sensitivities associated with these cases.

50 Best Lawyers in Columbus
Selected by his Peers

Brad Koffel, founding partner of Koffel Brininger Nesbitt shares with us how his practice has become a leading criminal defense and DUI firm in Ohio. Watch his full story here! Learn...