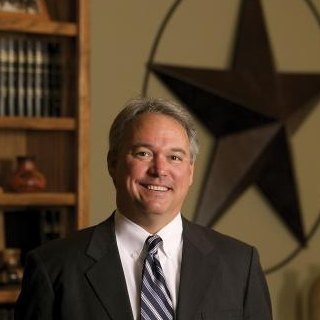 Since 1985 Brad has fervently defended those who have been seriously injured or killed in major trucking and motor vehicle accidents, by dangerous drugs and medical devices and industrial catastrophes, or whose lives have been seriously disrupted or even destroyed by the bad faith conduct of an insurance company. He selects his clients methodically, only accepting clients suffering serious injury or even death caused by the egregious conduct of others and that have a high degree of merit. Brad is not interested in accepting just any case.

As reminders of the past, Brad hangs on to mementos from cases that have particular significance. He also has a collection of awards, including an A.V. rating by Martindale-Hubble (the highest awarded for ethical conduct and merit) and repeated recognitions as a Texas Super Lawyer by Thomson Reuters as published in Texas Monthly and an Attorney Worth Knowing by Fort Worth, Texas magazine. Brad has been Board Certified by the Texas Board of Specialization in Personal Injury Trial Law since 1997, an honor held by less than 2 percent of the lawyers licensed to practice in Texas.

Learn more about Brad Parker and his accomplishments on our website at https://parkerlawfirm.com/

Partner
Parker Law Firm, P.C.
2003 - 2013
Parker Law Firm, P.C. has an unwavering commitment to people who have been killed or seriously injured in major trucking and motor vehicle accidents, by dangerous drugs and medical devices, in aviation accidents and in industrial catastrophes. The firm also represents those that have been wrongfully denied insurance benefits to which they are entitled. Parker Law Firm is also called upon and has forged a strong position in the trial of business and commercial cases. Parker Law Firm, offers comprehensive legal services for clients whose personal, business or property rights have been adversely affected. Built on years of trial experience, a tradition of personal service and a well-deserved reputation for zealous representation of our clients, our firm is dedicated to the timely delivery of outstanding results. As a confirmation of our continuing success, the vast majority of our cases are referrals from former clients and other lawyers.

H.G. Wells Outstanding Trial Lawyer Award
Tarrant County Bar Association
2017
The H.G. Wells Outstanding Trial Lawyer Award shall be presented annually to an actively practicing trial lawyer who is primarily engaged in the representation of injured and damaged plaintiffs in personal injury and other civil litigation and who, in his or her legal career, has demonstrated high ethical standards and has demonstrated exceptional professional conduct and trial advocacy skills and accomplishments, thus enhancing the image and reputation of the plaintiff trial lawyer. This award is to be presented in honor of H.G. Wells (1933-2008), a gifted, talented, gentlemanly and widely respected Fort Worth plaintiff’s trial lawyer, founder of the Wells, Purcell & Kraatz law firm, founding member of the Fort Worth Chapter of the American Board of Trial Advocates in 1983, former TCTLA President in 1977, former member of the State Bar of Texas Grievance Committee, former member of the original Texas Board of Legal Specialization for Personal Injury Trial Lawyers, and former member of the Texas House of Representatives from 1959 to 1965.

Fort Worth "Attorneys Worth Knowing"
Fort Worth, Texas Magazine
2011
Has been recognized repeatedly since 2002.

Parker Law Firm | Helping You Put Your Life Back Together

See what client's have said about Brad.