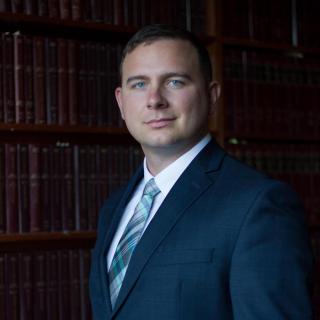 Brandon C. Mayberry grew up in Jonesboro, Illinois. After high school, Brandon attended Shawnee Community College where he earned an Associates of Arts degree. He then attended Southern Illinois University, where he earned a B.A. in Paralegal Studies with a specialization in Pre-Law graduating Cum Laude. From there, Brandon went on to attend Southern Illinois University School of Law. Brandon graduated from the SIU School of Law. While in law school, Brandon was a member and marshal of the Phi Alpha Delta law fraternity. While attending SIU School of Law Brandon began working as a law clerk for the Law Offices of Armstrong and Green and continued to work there throughout law school. After graduating and being admitted to the Illinois Bar he became an Associate Attorney with the firm of Armstrong & Green.

Q. Am I responsible for all of my ex husbands medical bills if he doesn't pay them or just half?
January 6, 2017
A: You can be held liable if you either co-signed for the debt or if the debt is considered a "family expense." Whether a debt is a family expense depends on whether the expense conduces to the welfare of the family. Medical debts for necessary medical care have been historically held to be family expenses based on this definition for which either spouse can be held liable. Unfortunately, the only way for a spouse to protect herself is via divorce or to ensure that the debts are paid.

Q. Two names on title, getting divorced. Ex refuses to give car back for repossession.
January 6, 2017
A: If both names are on the title then you are both responsible for it. Even after its repossessed you may be responsible for the debt left. You should speak to an attorney. They may be able to subpoena the DMV to find the address that is registered to the VIN.

Q. if a parent files a police report for domestic violence will i go to jail if my boyfriend doesn't want to press charges?
January 6, 2017
A: Once filed it is usually up to the States Attorney to decide if they will proceed with any criminal charges.

What's it Really Take to be a Lawyer?