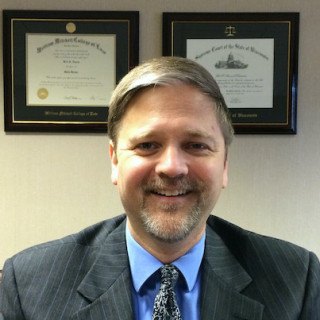 I grew up in Brownsdale, Minnesota, a small town in the southeastern corner of the state near Austin & Rochester. After graduating from Hayfield High School, I attended Luther College in Decorah, Iowa. I was a music major, and received my B.A. in 1987. That same year, I met my future wife, a Cassville native. We were married in 1991.

My first job after college was teaching vocal music at Bloomington, Wisconsin, which later merged with another school to form River Ridge School District. A few years after consolidation, the new district cut the music staff from four teachers down to two. After eighteen years, my position was eliminated and I decided to go to law school.

I graduated from William Mitchell College of Law (now Mitchell Hamline) in May of 2008, passed the Wisconsin bar exam in July 2008, and was admitted to practice in October of that year.

I've been practicing bankruptcy law ever since. My former partner, Mark Bromley, taught me more about bankruptcy law than anyone. I had a bit of a head-start over most first year attorneys, in that I was working with Mark even while I was in school. I hit the ground running!

I limit my practice to creditor-debtor issues for a few reasons. The most important one is that bankruptcy is a minefield, and is no place for a "dabbler." Given the amount at stake for most clients, it doesn't make sense to file a case without knowing what you're getting into.

If a client talks with me, and bankruptcy isn't in his/her best interests, I'll let them know. "When your only tool is a hammer, everything looks like a nail." I've been practicing debt-relief for consumers and small businesses for a long time, and I have lots of tools at my disposal. If you have debt problems, I'll customize the help I provide to your situation; I won't push a solution that may not be right for you, but is easier for me.