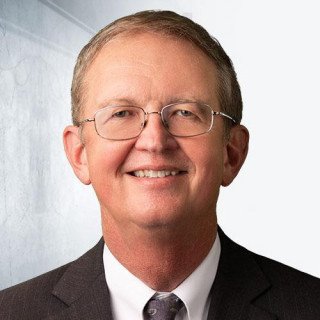 Chuck enjoys representing injured workers against large insurance companies and employers, working to assure that they receive the medical care that they need to recover and the benefits that they and their families require during the recovery process, as well as a fair settlement or award after treatment is complete.

He enjoys the unique challenges that each case presents and assisting clients with understanding and maneuvering through the always evolving worker's compensation law and procedure.

Charles (Chuck) Edmiston grew up in the small town of Abingdon, Illinois and attended the University of Illinois, graduating with high honors and a degree in Journalism in 1976. He then attended the University of Iowa College of Law, where he graduated with honors in 1979. Chuck took and passed the Iowa bar exam in January 1980 and the Illinois bar exam in February 1980.

He began his legal career working with a general practice firm in north central Iowa for a few years, then moved to Fairfield in southeastern Illinois where he served as assistant state's attorney for 2 ½ years and then was Public Defender for Wayne County and Richland County, Illinois, as well as pursuing his own general practice in Fairfield.

In 1987, Chuck moved to Rushville, Illinois to join the Kanoski Bresney firm in its growing regional personal injury and worker's compensation practice. Chuck has focused his practice for more than 30 years on worker's compensation, representing injured workers at all levels, from appearances before Arbitrators to the Illinois Supreme Court. In 2003, Chuck had the privilege of arguing, and winning, >Sisbro vs. Industrial Commission before the Illinois Supreme Court, overturning an Appellate Court opinion that would have limited injured workers' ability to recover for injuries that aggravate a pre-existing condition.

If you or a loved one has suffered a personal injury, the attorneys at Kanoski Bresney can protect your rights and help you seek justified financial compensation. Dedicated to helping...