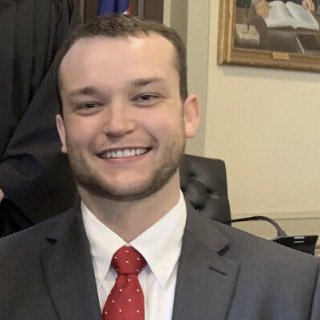 Charles “Charlie” Gray spent his entire life in Wendell, North Carolina. A lifelong Wolfpack fan, Charlie attended N.C. State University where he earned a Bachelor’s degree in Political Science with a Minor in Biological Sciences. Charlie then made his way to Campbell University where he received his law degree (JD) and, simultaneously, received a Master of Laws (LLM) from Nottingham Law School in the United Kingdom. While in law school, Charlie developed a passion for representing the criminally accused and being in the courtroom.

Charlie’s enthusiasm for criminal defense stems from a desire to guide others through the complex criminal justice system. He finds a sense of fulfillment in making the extremely stressful process of being accused of a crime just a little less scary for his clients. Charlie now practices criminal and traffic law, which allows him to be at the courthouse every day. His creative approach to problems allows Charlie to find unique resolutions to his client’s issues.

When he is not working, Charlie can be found spending time with his wife and their many pets as well as cheering on the N.C. State Wolfpack.

Q. I was issued a hit and run citation. I didn’t realize I hit the other vehicle in a parking lot. What should I do next?
July 30, 2021
A: Every county handles these differently. In some, if the owner of the other car is made whole (i.e. if your insurance pays for the damage or you pay for it out of pocket) the DA will dismiss your case or reduce it to a lesser offense. It would be best for you to get an attorney in the county where you received the ticket, and they should be able to get this resolved for you. Nothing to panic over, but also not something to disregard completely.

Q. I have been charged today (citation) for driving at 85mph on an highway with 65mph limit, lincoln county NC.
July 30, 2021
A: Most counties reduce speeding tickets to give people an incentive to go ahead and take care of them. Technically, speeding at a high enough speed is treated as a criminal charge and, if convicted, would show up on a background check. Getting it reduced would address this and is usually how traffic tickets end up being resolved. For what it is worth, most employers, schools, etc. are not going to be as concerned with a speeding ticket as they would be a true criminal conviction (theft, assault, etc.).

Q. My court appointed attorney told me I had an FTA with 25000 secure bond but 4 days later no warrant issued. Why?
July 30, 2021
A: An FTA is not the same thing as an Order for Arrest (OFA). It is possible an OFA has not been issued yet, some counties allow a grace period between the missed court date and issuing an OFA to give people with a good reason for missing court a chance to fix it. It is also possible there is an OFA for you but they just have not served you yet. This can be due to the police not having a current address to find you, the police are busy and have not gotten to it yet, or a number of other reasons. Ask your attorney if there has already been an OFA issued and, if so, if there is any way to have it recalled.