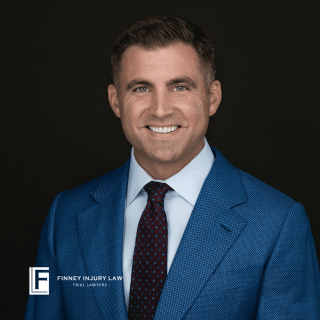 Christopher J. Finney received his law degree from St. Louis University. Upon graduation, he accepted a position as an assistant circuit attorney in the Circuit Attorney’s Office in the city of St. Louis. While at the Circuit Attorney’s, Chris handled a variety of issues, including Grand Jury indictments, felony gun and drug crimes. After the CAO’s, Chris then accepted a job at a large insurance defense firm where he handled cases ranging from dog bites to premises liability to auto collisions to wrongful death. He gained an insight into how an insurance company and defense team analyze and handle claims and litigation. In 2012, he joined his father and his brother. In 2018, Chris opened his solo trial practice, Finney Injury Law to try injury claims of all types, including trucking crashes, auto collisions, wrongful death, catastrophic injury and premises liability. Prior to law school, Chris was a teacher and football coach at Regis High School in Denver. He returned to St. Louis and continued coaching football at St. Louis University High School until he began working at the Circuit Attorney’s Office. As a former football player and coach, Chris takes a special interest in head injuries, including concussions and traumatic brain injuries. While in law school, Chris was awarded the David J. Hensler academic award for excellence in trial advocacy. In private practice, he was selected as a member of the Million Dollar Advocates Forum at the age of 30, an invitation-only group in which less than 1 percent of attorneys are members nationwide. Chris was also selected as a Rising Star by SuperLawyers, an honor that is limited to 2.5% of all practicing attorneys in Missouri. “I enjoy sticking up for the person who has their back against the wall. In our business, we can level the playing fields of individuals and big corporations. I take a lot of satisfaction in the fact that our firm can make an enormous impact on someone’s life, even after that per

Member
Multi-Million Dollar Advocates Forum
2015
Membership is limited to attorneys who have 2won million and multi-million dollar verdicts, awards and settlements. Fewer than 1% of US lawyers are members.

Rising Star
SuperLayers
2015
Only 25% of Missouri attorneys have membership.

Best Attorneys of America
Rue Ratings
2015
Only 100 attorneys from each state are inducted.

Up & Coming Lawyer
Missouri Lawyers Weekly
2015
The winners are chosen based on their demonstration of excellence and their potential to make a difference in the legal profession and their communities. The awards recognize lawyers who are 40 or younger, or within 10 years of practice.

Client's Choice Award
Avvo
2014
This recognition is bestowed upon attorneys who have received at least fifteen 4-star reviews.

Missouri Association of Trial Attorneys
Board of Governors
2021 - 2022

When an injury through no fault of your own changes the way you experience your life and relationships, we are here. Life is more than just medical bills and lost...