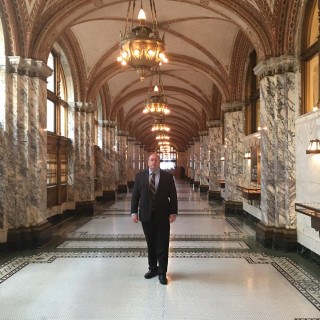 I am a local resident who was educated in the public school system in Las Vegas, Nevada. I was involved in the boy scouts and rode horses at the old Day Dream ranch at Warm Springs and Eastern. I learned to swim at Sunset Park and climbed many local mountains in our valley with the Boy Scouts. My father was a professor at UNLV and my mother worked as a registered nurse at sunrise for 30 years. Las Vegas has provided a vibrant environment for me to thrive as a child.

During my college years at UNLV, I worked as a student worker in the the athletic facilities which included the North gym where coach Tarkanian conducted his daily practices.

As a criminal justice major I participated in a 260 hour internship with the Las Vegas Metropolitan Police Department Southwest Area Command. During this internship I spent 260 hours on the streets with patrol officers.

During my law school education at Gonzaga University, I studied in Vienna, Austria with Supreme Court Justice Scalia. My studies in three different universities in Belgium, France, and Austrian law schools allowed me the opportunity to gain an understanding of the international criminal justice system through various founders of the International Criminal Court in the Hague.

After graduation, I started working with John P. Fadgen. John was an outstanding criminal defense lawyer and a gentleman who everyone respected. First and foremost, John was a trial lawyer who had crafted his cross examination skills over the decades. His subtle cross examination style would impeach witness after witness.

MULTI-MILLION DOLLAR ADVOCATES FORUM
Multi-Million Dollar Advocates Forum
2006
Established in 1993, the Million Dollar Advocates Forum (which includes the Multi-Million Dollar Advocates Forum) is one of the most prestigious groups of trial lawyers in the United States. Membership is limited to attorneys who have won million and multi-million dollar verdicts and settlements. There are over 4000 members throughout the country. Fewer than 1% of U.S. lawyers are members. The quality of our membership is very impressive and includes many of the top trial lawyers in the country. Many of our members have achieved numerous million and multi-million dollar results (several members have won billion dollar cases). Their practice areas include most areas of litigation, including: major personal injury, products liability, malpractice, construction, environmental, employment, insurance and business litigation. The common fact is that they have each demonstrated, in an objective and tangible way, their ability to accomplish superior results in complex cases. Certification by the Million Dollar Advocates Forum provides recognition of such accomplishment and a national network of experienced colleagues for information exchange, assistance and professional referral.