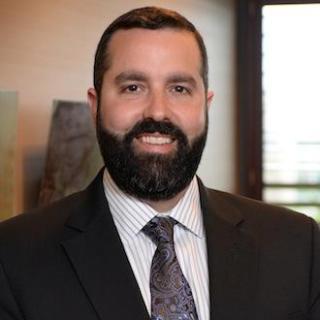 Christopher T. Casciano, an associate attorney with Brown & Barron, is a seasoned litigator and trial attorney who has spent his entire legal career fighting for the most seriously injured victims of medical malpractice, nursing home negligence and abuse, birth trauma, cerebral palsy, wrongful death and other catastrophic personal injuries. Chris has recovered many millions of dollars for his clients and their families, through both settlement and trial verdict. As a result of his reputation, leadership, dedication, and success, the National Trial Lawyers have identified Chris as one of America’s top young trial attorneys, having named him to their prestigious “Top 40 Under 40” list. Chris obtained his B.A. in biology and political science from Wake Forest University. Chris then obtained his J.D. from the University of Baltimore School of Law, where he served as the Managing Editor of the Journal of Environmental Law. Chris is admitted to practice law throughout the state and federal courts of Maryland, and has been admitted pro hac vice in the District of Columbia. He is currently a member of the Maryland Association for Justice (MAJ), the American Association for Justice (AAJ), the Maryland State Bar Association (MSBA), the Baltimore County Bar Association (BCBA) and the Bar Association of Baltimore City (BABC).