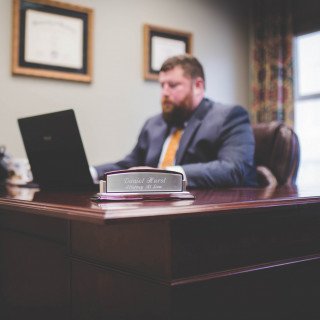 Daniel Hurst is one of the Founding Partners of Hurst & Hurst Law. He is a transplant to Danville and considers his move here to be among the best decisions he has ever made. Daniel grew up in Berea, Kentucky where he met the woman who would become his wife and law partner, Rebecca Hurst.

After graduating high school, Daniel served four years in the Marines as a Military Police Officer. He deployed to Iraq in 2006 where he served as a turret gunner in a unit whose primary objective was seeking roadside IEDs (Improvised Explosive Devices); so they could be destroyed before they could be used against American Service Members or Iraqi civilians.

After receiving an Honorable Discharge in 2008, Daniel returned home where he completed a Bachelor’s Degree in Psychology in 2010 and a Law Degree from the University of Kentucky College of Law in 2013.

Daniel has been practicing in Danville and the surrounding communities since he was licensed to practice law in 2013. He specializes in injury litigation (car accidents, motorcycle accidents, big truck accidents, slips and falls, dog bites, etc.) and criminal defense. If you have been hurt in an accident or charged with a crime and have questions, please call today to set up a free consultation with Daniel.