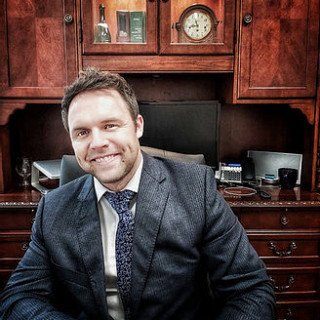 David is a Missouri native. He was born in Cape Girardeau and grew up in both the Festus and Arnold areas. He attended high school at Providence Christian Academy in Sappington and earned his bachelor degree from Oklahoma Baptist University in 2005.

Upon graduation, David worked at Farmers Insurance Group as a claims manager and oversaw over 60 employees. He then decided to further his education and ultimately graduated from Saint Louis University School of Law in 2013. During law school, David interned at the Jefferson County Prosecuting Attorney's Office throughout the summer of 2012, and interned for attorney Joseph Rubin in St. Charles County in the fall of 2012. He served as an assistant prosecuting attorney in the Jefferson County Prosecuting Attorney's Office in Hillsboro for 5 years. As a prosecutor, David gained valuable bench and jury trial experience and learned the ins and outs of criminal prosecution and a real sense of “how the other side thinks.”

After , David worked as an attorney with Wegge & Casey, P.C. before beginning the Casey Law Office, L.L.C. in 2022 where he enjoys a diverse practice of felony and misdemeanor criminal law and some civil.

Courtroom Technology in the 21st Century
2020
Missouri Paralegal Association
Lecture on the intersection of technology and law in the 21st century.

Q. How can I be charged with unlawful possession of a firearm not being a felon and not committing a felony.
April 13, 2022
A: There’s no way to know without seeing all of the evidence that is in the possession of the state. You have a right to something called discovery - this is the formal name for the process by which the parties to a legal proceeding gather facts and information in possession of the other party. In criminal cases specifically, a defendant has a right under what is known as the Brady Rule, from a famous 1963 Supreme Court case and subsequent law, to inspect the evidence in possession of the state. This is typically one of the first steps that a criminal attorney will take - motions for disclosure of state’s evidence.

SIS vs. SES probation in Missouri

In this video, attorney David Casey discusses changes in the law of criminal possession of a controlled substance. The Good Samaritan Law (195.205 RSMo) provides immunity from criminal prosecution...