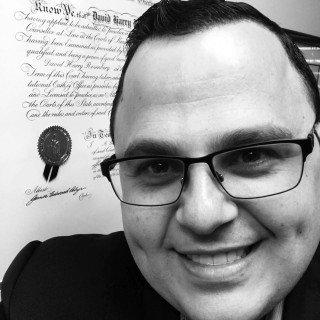 David Harry Rosenberg is an Avvo rated top employment lawyer in the Long Island/New York City area. In 2016, he was selected for inclusion in the Who's Who: Top Attorneys of North America publication. Also in 2016, the American Society of Legal Advocates selected Mr. Rosenberg as a Top 40 under 40 Labor & Employment attorney. Mr. Rosenberg was recently published in the New York Times as a Rising Star for New York Metro's Top Lawyers. He was given an Excellence in Practice award from New York's Super Lawyers and was selected as one of their "Rising Stars" in 2015 under the field of Employment & Labor. Mr. Rosenberg is a proud member of the Plainview-Old Bethpage Chamber of Commerce. Recently, he was as a Presiding Judge at the Peter James Johnson National Civil Rights Trial Competition which was held at the Nassau County Supreme Courthouse. Mr. Rosenberg graduated from the University of Miami in 2001 and Hofstra Law in 2004. He is a member of the New York State Bar Association and is a third generation lawyer. Mr. Rosenberg's grandfather, Harry Rosenberg, practiced law in New York for over 25 years. Ronald J. Rosenberg, the senior founding partner of Rosenberg, Calica, & Birney, is his father.

Workplace Bullying: We're Not Gonna Take It! (How should employees deal with bullies?)

Are you suffering at work? Employment lawyer David H. Rosenberg provides advice on how to deal with bullying in the workplace. A basic understanding of "retaliation" under the meaning...