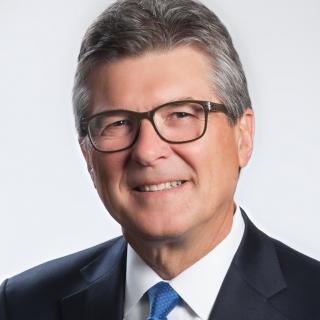 Doug Hajek is a business and financial institutions attorney at Davenport, Evans, Hurwitz & Smith, LLP in Sioux Falls, SD. A Tyndall, SD native, Doug didn’t enter the practice of law on the usual path. After graduating from college in 1972, Doug began a 10-year career in banking — first, as a commercial lender with US Bank in Rapid City, then in Minneapolis managing the company’s system-wide commercial loan participation pool, and finally, managing Western Bank’s mortgage banking operation in Sioux Falls. Doug entered law school in 1982 and graduated in 1985, with a practice in corporate law, public finance, and financial institutions. Today he works with banks in all aspects of regulation, management, and lending. He has also served as a contract lobbyist during ten sessions of the South Dakota Legislature, working primarily with trust, banking and insurance legislation. He served as the lead lobbyist for a variety of measures, including legislation authorizing the establishment of independent trust companies, which has since led to the formation of many private trust companies in South Dakota. In Doug's public finance practice, he serves as bond counsel to cities, counties, other public entities and nonprofits, and regularly appears before public bodies to explain financing structures and options. Doug Hajek has received an AV Preeminent® Peer Review Rating by Martindale-Hubbell®, has been selected by Best Lawyers® in the areas of Banking and Finance Law, Corporate Law, Mergers & Acquisitions Law, Financial Services Regulation Law, and Government Relations Practice. He was recently named Best Lawyers® 2016 Mergers and Acquisitions "Lawyer of the Year" in Sioux Falls, SD. Doug is also listed in Chambers and Partners Leading Lawyers for Business in the area of Corporate/Commercial Law, and in Great Plains Super Lawyers in Banking. Contact Doug Hajek at 605-336-2880 or dhajek@dehs.com.