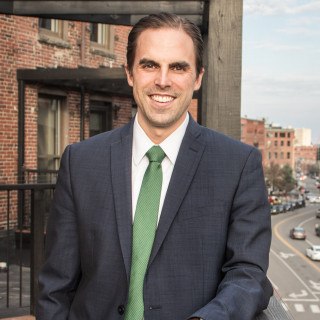 Over the course of his career as a Maine attorney, Dylan Boyd has successfully represented clients at all stages of litigation. Inside the courtroom, he has zealously advocated for clients at both jury trials and hearings before judges in both criminal and civil cases. He has also guided clients to successful results outside the courtroom by negotiating advantageous deals and drafting effective legal documents. Dylan Boyd was born and raised in Boothbay Harbor, Maine. He attended the University of Vermont and earned a bachelor’s degree in English in 2006. He returned to Maine to attend the University of Maine School of Law in Portland. During that time, he published an article in the Maine Law Review and served as the journal's Executive Editor; he also gained real world experience at the Volunteer Lawyers Project, Cumberland Legal Aid Clinic, and as a clerk at a local law office. In 2010, Dylan graduated from law school cum laude and was presented with the Outstanding Scholastic Achievement Award for Business and Commercial Law. Since that time, he has excelled as an attorney in Southern Maine, representing clients in everything from the most serious criminal charges and challenging civil cases to relatively easier matters such as wills and uncontested divorce proceedings. Dylan is licensed to practice in all courts in the State of Maine. He routinely appears in court, including courts in York, Biddeford, Alfred, Springvale, Portland, Bath, West Bath, Lewiston, and Auburn. In addition, he practices in the United States District Court for the District of Maine and the United States Court of Appeals for the First Circuit. He is a member of the Maine Bar Association, American Bar Association, and Maine Association of Criminal Defense Lawyers. In 2013, Dylan published his first novel, a legal thriller entitled Blue Lobster, which is available online and at local bookstores.

Raising the Dead: An Examination of In Re Kingsbury and Maine's Law Regarding Intestate Succession and Posthumous Paternity Testing
Maine Law Review
2009