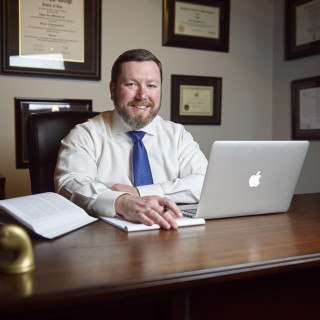 While in law school, Ed was a member of the MC Law Moot Court Board, Law Student Bar Association, Phi Alpha Delta Honors Program, American Association for Justice, and the Mississippi Association for Justice. As a member of the 2016 ABA Arbitration moot court competition team, Ed won first place in the National Championship. He was also a finalist in the 2015 Internal Trial Competition at Mississippi College School of Law, and selected for the inaugural Dave Galyon Award. Ed also participated in the Youth Court Clinic and the Guardian ad Litem program where he represented minors in Rankin County Youth Court and served as GAL for families needing adoption services or child custody services.

Before graduating from MC Law, Ed worked at the Mississippi Attorney General’s Office in the DUI unit, where he assisted in the prosecution of felony DUI cases involving death, and maintained the latest DUI research and laws in Mississippi. Ed also worked for the Rankin County District Attorney’s Office, where he prosecuted embezzlement and larceny cases, including jury trials. Ed gained civil litigation experience in personal injury and worker’s compensation while clerking for Bruce L. Barker, attorney at law, in Jackson, MS.

After graduation, Ed accepted a law clerk position with the Eleventh Circuit Court District where he worked for Senior Circuit Court Judge Albert B. Smith, III. While with the court, Ed assisted in all felony criminal matters and civil lawsuits before the court. After working for the court for a year, Ed entered into a partnership with Arthur Calderón, forming Calderón & Williams, PLLC.

Q. If my friend was drunk and entered the wrong house and fell asleep in his neighbor home.is that breaking and entering
April 3, 2018
A: The answer to this question is extremely fact intensive because it depends on the person's mens rea, or "state of mind." If the person was charged with burglary, the state must prove that the person broke in and intended to commit a felony therein. In this case, it sounds unlikely the person intended to commit a felony. Sleeping in someone else's house, with nothing further, probably would not rise to the level of felony conduct. However, this person could be charged with a misdemeanor under Miss. Code Ann. Section 97-17-87 for willful or malicious trespass: "(1) Any person who shall be guilty of a willful or malicious trespass upon the real or personal property of another, for which no other penalty is prescribed, shall, upon conviction, be fined not exceeding Five Hundred Dollars ($500.00), or imprisoned not longer than six (6) months in the county jail, or both." Voluntary intoxication is an available defense to burglary under certain circumstances, but likely would only bolster the "malicious" aspect of the willful or malicious trespass.

Q. If you have just a murder charge and the order say a life sentence with the department of corrections how long u stay
April 3, 2018
A: According to the Mississippi Legislature, "life" means exactly that..."life." As Arthur pointed out, it's a tricky question based on some recent developments, however, the sentencing judge must sentence a person within the boundaries of the statute, in this case, for life. No room for interpretation at this point.