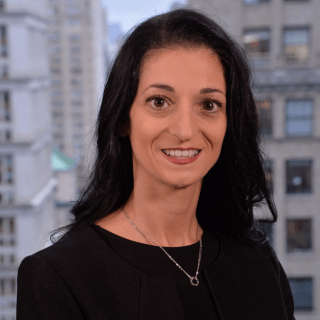 As a partner with the Sullivan Papain Block McGrath & Cannavo P.C. law firm in New York City, medical malpractice attorney Elizabeth Montesano has achieved unprecedented success advocating on behalf of those victimized by medical malpractice and other acts of negligence and wrongdoing.

Serving clients throughout the state, Ms. Montesano has earned a reputation as a deeply compassionate attorney who aggressively pursues the most favorable outcomes possible for those she serves. Throughout the course of her career, she has recovered millions of dollars in settlements and awards on behalf of those suffering as the result of birth injuries, missed and delayed diagnoses, surgical errors, defective medical devices and other similar tragedies.

Among her most notable success, she recently secured a settlement of over $2.4 million for the victim of a botched back surgery as well as a $2.15 million award for the family of a man who succumbed to cancer as the result of a failed diagnosis. Recognized for her high level of success, Ms. Montesano has been listed twice in the New York Law Journal Top New York Settlements, once in 2014 and again in 2015.

Active in her legal community, Ms. Montesano is a member of the Westchester Women’s Bar Association, and she sits on the board of directors for the New York State Trial Lawyers Association. She regularly conducts continuing legal education seminars across her region, and she has published several articles on a variety of topics related to medical malpractice.