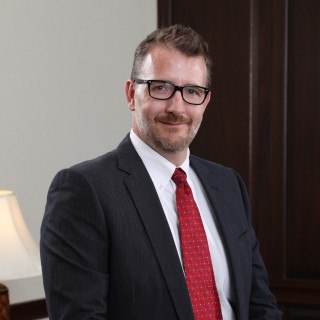 Attorney George W. “Chip” Brown III is an Athens residential and commercial real estate transactions lawyer at Blasingame, Burch, Garrard and Ashley, P.C. At the firm, Chip handles a wide variety of complex legal matters. He lives by the philosophy that, while real estate purchases are often the largest investments people will make, they don’t need to be overwhelming and frightening. Instead, Chip makes it his mission to help clients understand the process of purchasing or selling real estate while making the legal side of the process both fun and enjoyable. He believes that a client who is confident that the transaction is handled thoroughly and correctly will have a more enjoyable experience overall.

Chip grew up in Gainesville, Georgia with a father who was an attorney and judge. After graduating from Furman University, he attended the University of Georgia School of Law and fell in love with Athens. He remains active in the community, serving as a chairman of the board for the Athens Area Boys & Girls Club. In addition to pro bono work, he has also served on several board for community non-profits and has coached Little League basketball and soccer.

Chip’s legal practice has earned him a number of awards and recognition from prestigious organizations. In 2008, he was awarded the Athens Area Association of Realtors Affiliate of the Year Award and, in 2011 and 2013, received the Women’s Council of Realtors Affiliate of the Year Award. He was also recognized as the Athens Banner-Herald 2009-2014 “Best Attorney.” After a three year period in which this award was retired, he again won in 2018.

With every unique situation, Chip offers extreme attention to detail while also maintaining a joyful, positive attitude during straightforward and stressful transactions. He believes in helping his clients obtain a level of confidence and understanding that can help them both in the present and in the future.

Affiliate of the Year Award
Women’s Council of Relators
2013

Affiliate of the Year Award
Women’s Council of Relators
2011

Affiliate of the Year Award
Athens Area Association of Realtors
2008