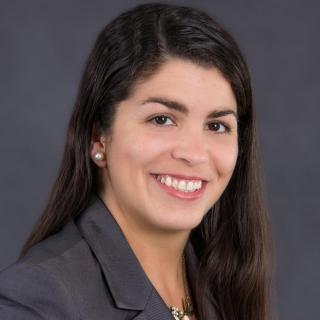 Ms. Velázquez received her Juris Doctorate from the Pennsylvania State University Dickinson School of Law where she received several merit scholarships. She was inducted into The Order of Barristers for her performance in the Thomas Tang Moot Court competition where she represented her school and the Northeastern Region. In addition, she became a Martin Luther King Jr. Intern due to her dedication to Public Service prior to becoming a Public Interest Advocate for the Miller Center for Public Interest Advocacy. She worked at Hershey Entertainment and Resorts focusing on Worker’s Compensation Injuries along with Patent and Copyright law in order to protect the company’s interests. Ms. Velázquez served as an Assistant State Attorney for the Miami State Attorney’s Office where she developed successful litigation skills and later went on to practice immigration law and insurance defense. Ms. Velázquez received her Bachelor’s degree from the University of Miami in Coral Gables, Florida where she studied Political Science and Spanish. She was in the Dean’s List and graduated with Honors after three years. Ms. Velázquez is fluent in English and Spanish. She is admitted to practice in the Florida Supreme Court and the United States District Court for the Southern District of Florida.

Immigration Attorney
Trujillo Vargas Gonzalez Hevia LLP
2016 - Current
No matter what legal issue you are facing, Ms. Velazquez will take the time to understand your situation, address your questions and concerns, and keep you updated as things progress. As an immigration lawyer she procures approvals for change or adjustment of status applications. She obtains difficult work visas and renewals. She will research country situations to gather evidence for political asylum and religious persecution cases. Ms. Velázquez writes briefs and represents clients in deportation and proceedings.

Attorney/Partner
Aigen & Velazquez, P.A.
2007 - 2016
As a partner at Aigen & Velazquez, P.A., Ms. Velázquez was dedicated to personal injury and immigration representation. Her goal was to help obtain the best possible compensation for bills, pain and suffering, lost wages and other damages.

Associate Attorney
Rudd & Diamond, P.A.
2008 - 2010
As an attorney for Rudd & Diamond, P.A., Ms. Velázquez represented a diverse group of clients in civil litigation matters. She managed pre-trial discovery in as many as forty bodily injury and property damage cases for the Defendant, including several cases involving death and/or catastrophic injuries in Dade, Broward, and Monroe County. She participated in trial proceedings, including arguing pre-trial motions, preparation of jury instructions and verdict form, and the selection and design of all trial exhibits. She successfully mediated bodily injury cases. She conducted and defended numerous depositions, including plaintiffs, defendants, eyewitnesses, before and after witnesses, police investigators, experts from a variety of fields and treating physicians. She conducted multiple Examinations Under Oath regarding first party homeowner’s insurance claims and managed all pre-suit investigative activities, including responding to several civil remedy notices. She also drafted and argued motions and corresponding memoranda of law, including motions for summary judgment on a variety legal and factual of issues for Judicial Circuit Courts throughout the state of Florida. Finally, she drafted detailed case analysis in a variety of cases.

Professional Woman of the Year
NAPW
2013

Rising Star
Super Lawyers
2012
Super Lawyers is a rating service of outstanding lawyers from more than 70 practice areas who have attained a high-degree of peer recognition and professional achievement. The selection process includes independent research, peer nominations and peer evaluations. While up to 5 percent of the lawyers in a state are named to Super Lawyers, no more than 2.5 percent are named to Rising Stars.

Up and Comer
Florida Legal Elite
2012

TECHO
Counsel
2014 - Current
Activities: As Legal Counsel for TECHO’s U.S. operations, Ms. Velázquez advises the organization as a volunteer on several legal matters including human resources and immigration. Ms. Velázquez is also focused organizing a series of professional networking events in South Florida to raise funds and awareness for TECHO. Through the joint work of families living in extreme poverty with youth volunteers, TECHO aims to overcome poverty in slums. TECHO seeks to build a fair and poverty free society, where everyone has the opportunities needed to develop their capacities and fully exercise their rights. TECHO is present in 19 countries across Latin America and the Caribbean. For more information, please visit Techo.org

The Pennsylvania Legal Services
Intern
2005 - 2007
Activities: Created a link between the lawyers and the Hispanic Community. Analyzed issue spotting in order to determine the situations that best needed of legal services.