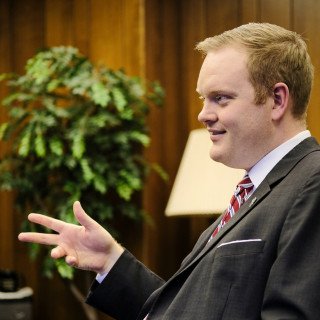 James Greenwood is admitted to practice in Iowa, Illinois, the U.S. District Court of the Central District of Illinois, and U.S. District Court of the Southern District of Iowa. In addition, James is licensed to practice before the Department of Veterans Affairs.
James works primarily in the areas of Business Law, Real Estate, Contracts, and Estate Planning. He is a member of the American Bankruptcy Institute, the Iowa State Bar Association, the Illinois State Bar Association, and the Scott County Bar Association.
James holds his Juris Doctor and Masters in Business Administration degrees from Drake University where he was awarded the Weindruch Scholarship for his work in tax. He received his BA from the University of Massachusetts, Amherst in Human Rights and Capitalism as a Commonwealth Honors College Scholar with great distinction and graduated magna cum laude.
James grew up in Idaho and spent eight years in the nuclear reactor operations field on submarines in the U.S. Navy. He has worked directly for the CEO of a startup company that specialized in super-hard self-lubricating ceramics and has worked for a Fortune 500 company developing business across Eastern Iowa and Western Illinois.

Illinois
Supreme Court of Illinois
Since 2017

Iowa
Supreme Court of Iowa
Since 2015