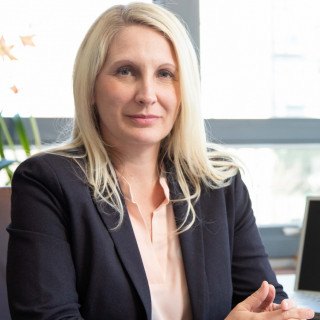 Janet Amburgey is a Board Certified Specialist in Family Law. Since graduating from Appalachian School of Law in 2008 she has focused her practice exclusively on family law matters, assisting people through family chaos, ensuring the protection of their rights and property and helping to blend and expand families. She has represented clients in divorce and separation with issues surrounding child custody, child support, alimony, and in property settlement matters. She also assists families through adoption, name changes and protects parents and children in both domestic violence matters and DSS matters. Janet believe’s problem-solving is a primary responsibility of a lawyer, and through her family law practice she facilitates the transition to newly designed futures, which is the heart of any family law practice. Janet joined Gum, Hiller & McCroskey in 2012 and became a named partner in 2018.

Janet is a member of the Family Law Section of the North Carolina Bar Association where she has previously served as the co-chair on the parents rights committee in 2017. She is an active member in the 28th Judicial Bar, serving on the executive committee since 2015, and currently, serving as Secretary since 2018. Janet has been listed for inclusion in the North Carolina Super Lawyers master list since 2020 and was listed in their “Rising Stars” category in both 2017 and 2018. She has been recognized in the Legal Elite Family Law Section in 2017 and 2018 and included in their Young Guns section in 2015. Janet has also been recognized by Best Lawyers in America, Family Law Section since 2019 and maintained a BV Distinguished Rating from Martindale Hubbell since 2015.