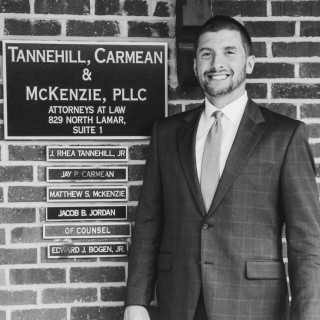 A resident of Oxford, Mississippi for the past 25 years, Jay has vigorously fought for individuals facing both misdemeanor and felony charges in the State of Mississippi.

In 2017, Jay was named Oxford's Best Lawyer by The Oxford Eagle and Tannehill, Carmean & McKenzie has been voted Best Law Firm the past 11 straight years by residents of Oxford.

Jay holds an AV Peer Review Rating which is an outstanding achievement and demonstrates that a lawyer has earned the highest rating available for their legal ability and professional ethics.

Since graduating from The University of Mississippi School of Law in 1999, Jay has concentrated his practice on defending citizens charged with crimes ranging from drug possession and driving under the influence to felony assault and murder.

After graduating from the University of Mississippi School of Law in 1999, Jay served as a law clerk for Presiding Justice C.R. "Chuck" McRae of the Mississippi Supreme Court. Jay then worked for Tollison Law Firm, P.A. in Oxford for four years, returning to the firm he had clerked for while in law school. While there, Jay was made a partner in the firm.

Jay, originally from Caruthersville, Missouri, is married to the former Wendy Chambers of Oxford, Mississippi. They are the proud parents of identical twin girls, Jane Reeves and Evelyn Rose, born on May 10th, 2006.

The Practical Aspects of Criminal Law, UM Law School
June 5, 2015
Jay Carmean spoke to law students from the University of Mississippi School of Law. The two hour session included the handling of all misdemeanor and felony matters in state courts in Mississippi over his 15 years of practice. The students are enrolled in a class teaching the practical realities of the criminal law practice which is being taught by Professor Ronald J. Rychlak.

AV Preeminent Rated
Martindale-Hubbell
2014
An AV® Peer Review Rating is an outstanding achievement and demonstrates that a lawyer has earned the highest rating available for their legal ability and professional ethics. The Martindale-Hubbell Peer Review Ratings system is based on the confidential opinions of members of the Bar and the Judiciary, including both those who are rated and those who are not. Martindale-Hubbell representatives conduct personal interviews to discuss lawyers under review with other members of the Bar. A compilation of these opinions from various sources is necessary to form a consensus, and lawyers under review are sometimes asked to provide professional references to assist with the process. In addition, confidential questionnaires are sent to lawyers and judges in the same geographic location and/or area of practice as the lawyer being rated.