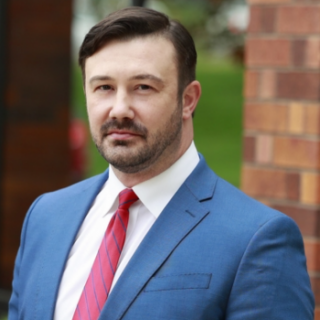 Bio
Jerry is licensed in the state of Missouri and primarily focuses on family law matters in litigation and mediation. As a current attorney and former police officer with the City of North Kansas City, his training and experience help him to empathize with people who are going through an emotional and difficult time in their lives.

Jerry was born in Oklahoma but moved to Kansas City during high school, where he was active in both the wrestling and football programs. After graduation, Jerry enlisted in the Army Reserve and is a veteran of Operation Enduring Freedom.

Jerry graduated from Washburn University School of Law where he served as the president of the Criminal Law Society, and was active in the Veterans Legal Association of Washburn. In his free time he enjoys spending time with his wife, Ashley, and their four children, as well as working out and watching the Chiefs and Royals games.