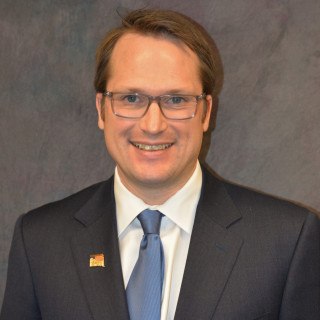 Having worked at the highest levels of American campaigns and elections, Arends served as a campaign aide to former president George W. Bush and former presidential candidates Senator John McCain and Congresswoman Michelle Bachmann. Joel had the high honor and distinct privilege to personally endorse Donald Trump and his presidential campaign on the deck of the USS Iowa in September 2015.

Joel enlisted in the United States Army as a private in 1995 and has risen through ranks to achieve the rank of Lieutenant Colonel in the United States Army Reserve. Arends served as an infantry platoon leader in Iraq with the Army's 1st Cavalry Division and was awarded the Bronze Star Medal and Combat Infantryman's Badge for his service to the Army and our nation. He was recognized by Secretary of Defense Donald Rumsfeld as one of the fifty heroes in the Global War on Terror and has been profiled in Investor's Business Daily.

Joel is married to his beautiful wife Robin and they have three children together Noah, Abigail and Zachary. Joel and his family are members of Holy Spirit Church and active in their community.

Joel Arends is licensed to practice law in both South Dakota and his native state of Iowa.

Report from Iraq: Lessons and Results of the Surge
Vets for Freedom
October, 2008

Trust We Can Believe In
National Review Online
July 18, 2008