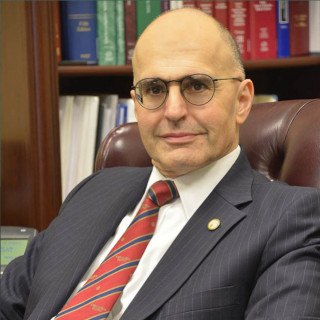 John J. Giuffré is a trial lawyer with over thirty years’ experience and the founding lawyer of Giuffré Law Offices, P.C. Having left a Park Avenue corporate law firm, he has focused his law practice on helping individuals – people who are injured through negligence or neglect. John has successfully represented hundreds of people injured in motor vehicle accidents as well as cases involving construction site injuries, dog bites, bed sores, nursing home malpractice and medical malpractice. John is a member of the Nassau County Bar Association where he serves as a member of the Ethics Committee. He earned his bachelor’s degree at Columbia College, where he was elected to Phi Beta Kappa. He earned his law degree, cum laude, from the University of Pennsylvania Law School where he was an editor of the Journal of International Business Law. John was admitted to the New York bar in 1988 and is admitted to practice in Connecticut, New Jersey, and Pennsylvania, as well as the Federal courts in New York City and Long Island. John is a passionate and dedicated advocate for those who have been injured in all types of motor vehicle crashes, including car, bus, truck, tractor-trailer, ride share and motorcycle accidents. He holds negligent parties accountable and obtains maximum compensation for those who have been injured, even in the most complex of motor vehicle accidents. John is a member of the New York State Trial Lawyers Association and the American Association for Justice (formerly the American Trial Lawyers Association). John has received numerous accolades including being selected for inclusion in Who’s Who in America, Who’s Who in American Law, and Top Lawyers of North America, He is dedicated to his community where he serves on the Zoning Board, teaches Sunday School and serves as a trustee of the school started by his church in Flushing, New York, where he grew up. John is active in the local business community as a member of the Lions Club and Chamber of