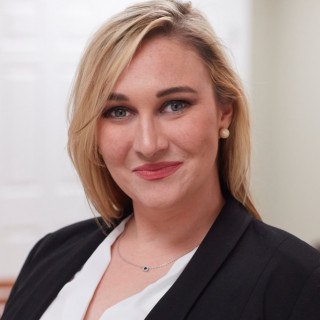 Attorney Kathleen Thompson (formerly known as Kathleen Coffey) is a dedicated trial lawyer who has focused her practice on helping injury victims seek justice for a variety of personal injuries including medical malpractice and nursing home abuse.

She earned her Juris Doctorate from the University of Kentucky College of Law. After Attorney Thompson graduated, she went on to clerk for the U.S. Magistrate Judge Edward B. Atkins in Pikeville, Kentucky. In this capacity, she performed extensive legal research and writing while acquiring unique exposure to all stages of federal criminal and civil litigation.

From there, Mrs. Thompson’s career soared as she began working for the U.S. Department of Justice as an Assistant United States Attorney for the Eastern District of Kentucky in London, Kentucky. Here, she was tasked with managing complex investigations involving multiple Title III wiretaps, and leading multifaceted prosecutions of drug conspiracies and organized crime.

Attorney Thompson turned her focus to civil litigation after it became clear that people who were hurt by the negligence of others needed a voice when they couldn’t fight for their own rights. Prior to joining Wilt and Thompson, PLLC, she handled several complex medical malpractice mass tort litigations, ultimately winning her clients an injury settlement of more than $21 million.

In her time with Wilt and Thompson, PLLC, Attorney Thompson has devoted her career to medical malpractice victims, nursing home abuse survivors, and injury victims across Kentucky. She isn’t afraid to go up against high-powered insurance companies to get her clients the compensation they are entitled to, and she won’t back down, even if it means bringing the case to trial.

When Mrs. Thompson isn’t in court or with clients, she spends her days cooking with her husband, Nick, and spending quality time with her family.