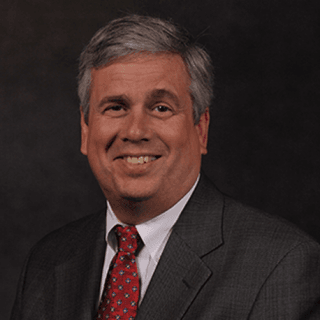 Mr. Wright was born in Murfreesboro, Tennessee. He attended Middle Tennessee State University (B.S., summa cum laude, 1977); the University of Tennessee (J.D., 1980). He was honored with the Order of the Coif and served on the Tennessee Law Review. Mr. Wright's father was a lawyer so he grew up working in his Dad's office. He is admitted to the United Supreme Court Bar as well as all Tennessee State and Federal Courts. He is also admitted before the Sixth Circuit and Fourth Circuit Bar as well as the U.S. Court of Claims. His practice is varied covering a broad spectrum of matters. Author credits include: Tennessee Current Legal Summaries. Co-Author: Avoiding Environmental Liability in Tennessee; Hazardous Waste in Tennessee. Mr. Wright was the Distinguished Alumni Speaker - University of Tennessee College of Law 2008 Commencement. He has been selected as a Mid-South Super Lawyer and has been selected and listed in a listing of Knoxville's best attorneys. He is AV rated and has been selected as one of the 10 best attorney's in Tennessee in client satisfaction. He has also been selected as one of the top 1% of lawyers in America by the National Association of Distinguished Counsel. The firm as a whole has been noted as a U.S. News Best Law Firms in America and as a top law firm in Fortune Magazine. Mr. Wright is a past Chair of the Tennessee Bar Association Tort and Insurance Practice Section. He has been on the Executive Committee of the Tennessee Bar Association Section on Environmental Law since the founding of the Section and is a past Chair of the Section. He is the Co-Chair of the Knoxville Bar Association Environmental Law Section. Mr. Wright served as lead State Chair for Tennessee for the Claims and Litigation Management Alliance and as an Education Committee Chair. Mr. Wright is a member of the American Inns of Court - Hamilton Burnett Chapter.

AV Rating
Martindale Hubbell
2017
The AV rating is the highest rating awarded. This based upon reviews by lawyers and judges.

Claims and Litigation Management Alliance
Member
2007 - Current
Activities: Mr. Wright has served: Education Committee and as a State Chair. Mr.Wright also has a CLMP designation from CLM. He has spoken at the annual conference.

Tennessee State Bar  # 009285
Member
1981 - Current
Activities: Mr. Wright has was a founding member of the Environmental Law Section. He has also served as The Chair of the Section Mr. Wright has also chaired the Section on Torts and Insurance Practice.

Q. Post-Judgment Interrogatories Limitations
January 12, 2023
A: Without more details it is hard to answer. Look up motions for Protective Orders in Tennessee or you may need to hire a lawyer to file one for you. I am not sure whether you are entitled to relief- but that would be one avenue to approach.

Q. what tennessee case law says that a party disputing contractual intent must prove neither party intended a contract?
January 11, 2023
A: Both parties must agree to as to the formation of a contract - a unilateral "contract" generally would not be binding. But contracts can be formed by one party requesting an action and the other party performing and the performance is an acceptance- so your question's answer may be fact specific.

Q. Ive got a company calling me 18 times in the past 5 days. It is not a collection company, its a mortgage company. Help
January 10, 2023
A: It sounds like you have told them not to call you- I suggest you block the number.