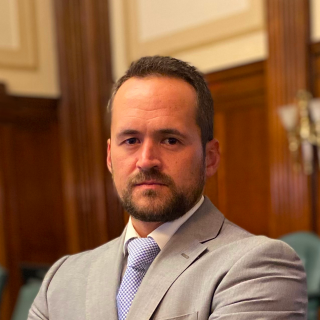 Nick Benjamin is a former police officer, prosecutor and North Carolina Assistant Attorney General. He has practiced for nearly a decade in Asheville North Carolina. The majority of his time practicing law came as a prosecutor in Buncombe County, where he has prosecuted everything from speeding tickets to first degree murder. Nick left the Buncombe County District Attorney's Office in July 2022 (when he was focusing on violent crimes and firearms offenses) to start his own practice. In addition to an extensive criminal law background which includes over 300 bench trials and over 40 jury trials, Nick was an assistant attorney general for the North Carolina Department of Justice and practiced criminal appellate work and condemnation and eminent domain. Prior to becoming an attorney, Nick was a police officer with the Asheville Police Department, where he was BLET certified and SFST certified - experience which has helped him in his criminal defense practice. Nick is a native of Asheville, and graduated from Mars Hill University and University of Arkansas school of law. Learn more about Nick at www.nickbenjaminlaw.com

Q. In North Carolina does the state have the right to appeal a DWI case to Superior Court.
January 30, 2023
A: yes, they can appeal if it’s motion to suppress.

Q. If I took papers out on someone and decided to drop charges can I do that
January 24, 2023
A: If the district attorney allows it, then yes. 95% of the time they will allow it. You may still need to go to court to tell the DA you want it dismissed

Q. I have a pending case ..I'm currently in drug treatment and my center sent in documentation. Now I dont see my case
January 10, 2023
A: It could mean you missed a court date and have a warrant, or it could mean you were indicted and haven’t been served with the indictment, among other things. Call your lawyer if you have one, or you can possibly call the district attorneys office and they can give you an update, or the clerks office. Better yet, hire a lawyer to help you