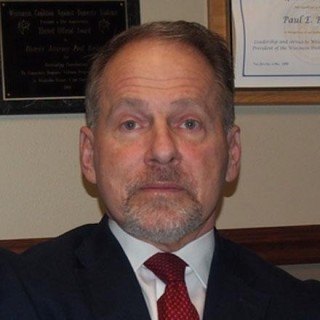 Paul was born in Milwaukee, WI and grew up on the south side of Milwaukee. Paul has five brothers and was raised by a single mom. Growing up on the south side of Milwaukee, Paul attended the local Catholic grade school and worked his way through school by working at gas stations, having a paper route and doing whatever he could to raise money to pay for tuition and books. Paul attended Pius XI high school and, once again, worked to pay all costs of his education, as did his five brothers.

Upon graduating from high school, Paul took a year off and worked in a foundry on the south side, only to discover that education was less strenuous (and not as hot!). He then enrolled in the University of Wisconsin-Milwaukee, majoring in social welfare/criminal justice. Upon graduating with honors from the University of Wisconsin-Milwaukee in three years, Paul attended Pepperdine University School of Law located in beautiful Malibu, CA. Paul was in the top of his class at Pepperdine and was placed on the Dean's List. However, longing to return to his roots, Paul returned to Wisconsin and completed his law studies at Marquette University School of Law, graduating in 1981.

Commendation
Executive Board of County of Waukesha