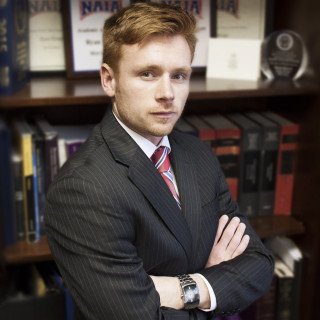 Ryan Krupp is a personal injury and criminal defense attorney in St. Louis and St. Charles County. Previously, he worked for both the Jackson County Prosecutor’s Office and Johnson County District Attorney’s Office where he appeared in court on behalf of the State of Missouri and Kansas in the criminal prosecution of among other things, Domestic Violence, Assault, Drug Cases, SVU Cases, Juvenile Offenders, and other felonies and misdemeanors. He tried numerous cases to a judge and jury.

Ryan is a native St. Louisan and is an alumni of Marquette High-School and Missouri Baptist University where he played men’s soccer, racking up several honors including two Academic All-American Awards, as well as Scholar Athlete Nominations and Academic All-Conference honors. Ryan is passionate about using his winning mindset to help people and ensure justice.

Excellence for the Future Award
CALI

4th Amendment and Motions to Suppress

Get a DWI in St. Louis? Ryan Krupp explains the process and law.

https://krupplawfirm.com/criminal-def... A DWI or DUI Charge in St. Louis or St. Charles County can come with serious consequences. If you have found yourself in this situation it is important to hire a St. Louis DUI DWI lawyer, especially one who has experience in the prosecution of DWI and DUI related crimes and knows what to look for. A DWI has criminal and collateral consequences, meaning that it could go on your criminal record and also affect other parts of your life including your driving privileges, your insurance and even your work. Don’t hesitate to contact a St. Louis DWI Lawyer of ST. Charles DWI lawyer at the Krupp Law Firm as some aspects of a DWI have time restrictions which can greatly affect how your case proceeds. If you want to know more about DUI DWI Law in St. Louis and St. Charles, here you will find the answers to some of the top 10 most frequently asked questions on the topic.

If you have been charged with Drug Trafficking. Missouri laws explained.