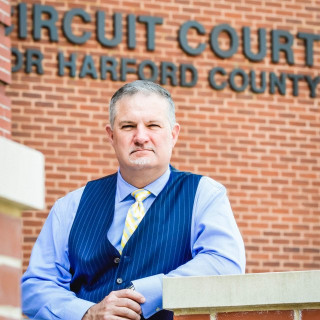 Graduate of Villa Julie College (now Stevenson University) in 1992 with a Bachelor of Science degree in pre-law/paralegal studies. Graduated from Widener University of Law in Wilmington, Delaware in 1995.

Admitted to the MD Bar and Fed. Bar for the U.S Federal Court for the District of MD in 1996. Employed as an associate attorney with the firm of Charles E. Chlan & Assoc. from 1988 until 2002. In 2002, left the firm and founded the firm of Law Offices of Thomas G. Harrison in Bel Air, MD.

Primary areas of concentration are in family law, including divorce, custody, domestic violence, and all facets of domestic relations cases and Chapter 7 bankruptcy.

Self employed, sole practitioner since 2002. Regularly appear and practice before the District and Circuit Courts in Harford County, Cecil County and Baltimore County. Routinely and regularly appear in the U.S. Bankruptcy Court for the District of MD.

President/Owner
Law Offices of Thomas G. Harrison, P.C.
2002 - Current
Opened my own firm/offices in Harford County, MD in 2002. Own & manage the firm.