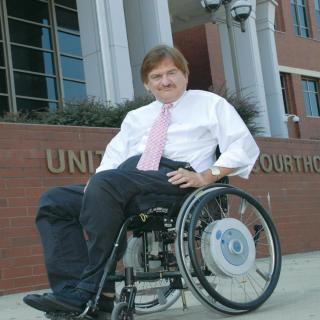 W. Ron Adams (b. April 26, 1957), attorney, philanthropist, family man, was born a son of an underground coal miner in Uniontown, Kentucky. Adams suffered extreme poverty and abuse throughout his youth and at 19 years of age became a quadriplegic as a result of being crushed in an underground coal mining accident. Adams attributes his early motivation coming from a loving mother and his own inward drive. He attended college after the mining accident and received 4 degrees and became one of the first 3 in Northern Kentucky University’s history to receive a joint, JD/MBA in 1987. Adams operates a highly respected law firm as a sole practitioner in Erlanger, Kentucky with a client base of over 8000, reporting a growth rate of over 800% during the past few years. During his life, he has survived 3 near death experiences, the coal mining accident that left him a quadriplegic, the development of a rare brain tumor, and a near fatal car accident. In 2007, Adams founded His Well Ministries, a non-profit ministry with an ongoing reach to thousands both locally and regionally. The inspiration for the ministry is the verse in the Bible, John 10:10 and the phrase “abundant life”. Adams lives with his wife Connie in Burlington, Kentucky and has 2 sons and 2 grandchildren. Adams attributes his relentless drive and hope for the future to his faith and the teachings of Joel Osteen, Pastor of Lakewood Church in Houston, Texas.