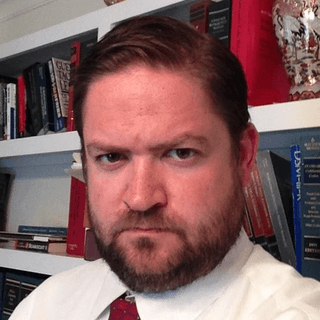 Wrix McIlvaine is a talented and steadfast trial attorney that has battled for justice in courtrooms throughout Georgia.

Dedicated to serving the underdog, he takes on tough cases against big government and corporate interests and fights for the downtrodden.

Wrix's Bankruptcy practice provides relief for those in debt and he serves as a Debt Relief Agent.

His litigation practice focuses on defending the Constitution, protecting civil liberties, giving a voice to the voiceless, and ensuring the injured receive fair compensation.

A lifelong musician and advocate for the arts and technology, Wrix also brings unique and specialized knowledge for those seeking to procure, defend and enforce copyright, trademark, patents and other intellectual property rights.

Wrix has been recognized as one of the Top 40 Trial Lawyers Under 40 by the National Trial Lawyers and as a Rising Star by Georgia Super Lawyer magazine in 2014, 2015, 2016, 2017, and 2018. In addition to civil litigation, he takes on difficult and high profile criminal matters throughout Georgia and has won acquittals for individuals charged with murder, armed robbery, and drug trafficking among other infamous crimes.