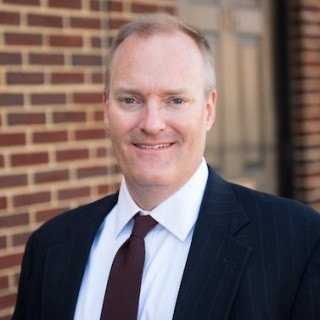 Andrew Skinner grew up in Charles Town, West Virginia. He graduated from Jefferson High School in 1988 and then attended the College of William and Mary in Williamsburg, Virginia, from which he received a bachelors degree in Economics in 1992. Andrew participated in the ROTC program at William and Mary and was commissioned as an officer in the United States Army. Andrew served on active duty in the Army for four years, serving as a tanker and then a logistician in the 4th Infantry Division. After coming off of active duty, Andrew started law school at the University of Texas School of Law in Austin, Texas, which is considered one of the top law schools in the nation. Andrew graduated with honors from the University of Texas and moved to Chicago, where he took up practice with Skadden, Arps, Slate, Meagher & Flom, one of the largest law firms in the country. His primary practice involved product liability lawsuits. Andrew returned home in September 2003 when he joined his father’s practice at Nichols & Skinner, which has since been renamed Skinner Law Firm. Andrew focuses on personal injury and consumer protection. Exceedingly important to Andrew are cases that seek to protect the public. For instance, Andrew believes that one of the most effective approaches to stop drunk driving and protecting our community members is to bring lawsuits that seek to bring drunk drivers and the bars that over serve them to justice. These so-called “dram shop” cases ensure that bars and patrons act responsibly by forcing them to compensate their victims who are injured in drunk driving crashes.

West Virginia Association of Justice
Board of Governors
Current

Jefferson County Chamber of Commerce
Board of Directors
Current

Leadership Jefferson
Founder and annual host
Current
Activities: As a program of the Jefferson County Chamber of Commerce, the primary goal of Leadership Jefferson is to educate current and future community leaders about Jefferson County's assets, opportunities, and hurdles, in order to strengthen the sense of community and ensure a prosperous future. During the 10-month program, participants develop leadership skills and hone their leadership abilities through training sessions under professional leadership. Participants meet the movers and shakers in Jefferson County and the State, from government officials to business owners to private citizens, all of whom help make Jefferson County what it is and what it could be. Perhaps more importantly, participants have great bonding experiences with each other and build important relationships for the future.