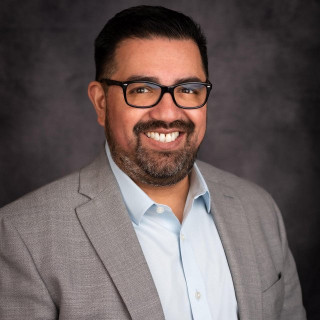 An experienced trial attorney and former Workers’ Compensation Judge, John has been involved in Workers’ Compensation for over 25 years. John believes in “service above self”. To that extent, he is actively involved in numerous community groups including Boy Scouts of America, Girls Scouts of America, Cub Scouts and Covina Rotary. John is an avid outdoor enthusiast and spends much of his time traveling in his RV camping across the Western United States.

John is a graduate of UC Santa Cruz (College 8) where he earned a B.A. Degree in Latin American & Latino Studies. He is a graduate of Santa Clara University School of Law where in addition to his J.D. degree, he also earned a Certificate in Public Interest Law. John also holds an M.B.A. from the University of Phoenix and is currently a candidate for a Doctorate of Education (Ed.D.) degree in Organizational Leadership from Grand Canyon University.

John is a Founder and the current President of LatinoComp. LatinoComp is a non-profit 501(c)(6) professional organization that consists of applicant attorneys, defense attorneys, plaintiffs attorneys, hearing representatives, lien representatives, rehabilitation counselors, interpreters, medical providers and attorney support services. The purpose of the organization is to enhance the quality of representation at the Workers’ Compensation Appeals Board and better serve our community.

He is also a member of the California Lawyers Association Workers’ Compensation Section and is admitted to practice in all California Courts including the United States Central District Court and The United States Court of Appeals for Veterans Claims.

President
John Hernandez, Esq., APC
2017 - Current
Helping people has been the main focus of John’s entire legal career. John started his legal career as a Deputy Public Defender in Santa Cruz County and now represents the rights of people injured in accidents as well as Veterans in disability claims. John knows California’s workers’ compensation regulations inside and out because he has spent time working on all sides of insurance litigation — previously as an attorney representing insurance companies for both personal injury and workers compensation claims, then as a Workers’ Compensation Judge and now as an applicant attorney. Whether you are an injured worker filing a workers compensation claim to collect the benefits to which you’re entitled. Call the best injury attorney.

Workers's Compensation Judge
State of California, Workers' Compensation Appeals Board
2012 - 2016
Assigned to Department 6 of the Los Angeles District Office where he presided over, and adjudicated, thousands of disputes between employees and employers that arose from the California Labor Code and Title 8 of the California Code of Regulations. During his time as a Judge, Mr. Hernandez also performed duties of the Acting Presiding Judge and was a supervisor to several law clerks from Loyola Law School. He is an approved Arbitrator for the Workers' Compensation Appeals Board.

Spring Into Action, But Fall Back On The Basics - Part 5 - PQME Litigation, CLA
2020
California Lawyers Association

California Lawyers Association
Board of Representatives
2020 - Current
Activities: Established in 2018, CLA is a nonprofit, voluntary organization and the new home of the Sections of the State Bar of California and the California Young Lawyers Association. Our extensive membership represents the vast diversity of California’s legal community and the various areas of law practiced throughout the state.

LatinoComp
Co-President
2003 - Current
Activities: LatinoComp is a non-profit 501(c)(6) professional organization that consists of applicant attorneys, defense attorneys, hearing representatives, lien representatives, rehabilitation counselors, interpreters, medical providers and attorney support services. The purpose of our organization is to enhance the quality of representation at the Workers' Compensation Appeals Board and better serve our community.