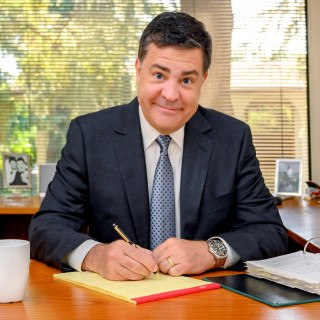 Marc founded the Law Office of Brody & Hughes in 1994 and then Hughes Law Group in 2000. He is very privileged to practice law with his wife, attorney Melanie Hughes. Mr. Hughes has advised and represented clients in thousands of family law matters over more than twenty-seven years in Superior and Appellate Courts throughout Northern California. He is a member of the Sacramento Bar Association, Family Law Section and the Placer County Bar Association, Family Law Section.

Marc has worked from an early age. At 12, he was the youngest member of the Retail Clerk's Union Local 1179. He worked afternoons and every weekend at a shoe store in Walnut Creek for many years until he received an opportunity to study in England.

Mr. Hughes studied Classics (the Great Books Integral Program) at St. Mary's College and at the Centre for Medieval and Renaissance Studies, Oxford. He obtained his law degree from McGeorge School of Law in 1992 and received further legal training at the Inns of Court, London. Mr. Hughes has completed over 300 hours in continuing education concerning family law subjects.

• Co-author of a brief to the United States Supreme Court concerning chilling effect of attorneys fee awards against victims of workplace sexual harassment.