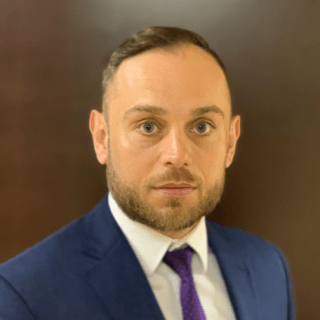 Matt is an experienced family law attorney, representing clients in divorce, custody, parenting time, paternity and child support matters. He has litigated disputes throughout Indiana, with a primary focus in Indianapolis and Hamilton County. In 2017, 2018, and 2019, Matt was named a “Rising Star” by Indiana Super Lawyers magazine. This designation is limited to 2.5% of Indiana attorneys 40 years old or younger or in practice 10 years or less.

Matt is also an experienced tax attorney, counseling and advising individuals and business owners in Federal and state tax matters, including tax disputes before the IRS and tax protests before the Indiana Department of Revenue.

Prior to founding Black Clay LLC with attorney Adam Clay in 2013, Matt spent 5 years working at the Office of the Indiana Attorney General. Matt was Deputy Attorney General under former Attorney General Greg Zoeller from 2010-2013 in the office’s Civil Litigation Section, representing state agencies and officers in both Federal and State court. From 2008-2010 Matt worked in Tax Litigation, and helped represent the State’s interests before the Indiana Tax Court.

Matt is a 2009 graduate of Indiana University McKinney School of Law, where he was a recipient of the Sacopulos Tax Award. Matt was also named to the Order of the Barristers, and twice competed in the Midwest Regional of the Philip C. Jessup International Law Moot Court Competition. In 2009, he co-wrote a survey of tax law changes for the Indiana Law Review. In 2005, Matt graduated from Ball State University where he was named to the Dean’s List seven times.

A native of Michigan City, IN, Matt and his family now live in Fishers, IN.

Visit blackclayindiana.com to find out more.