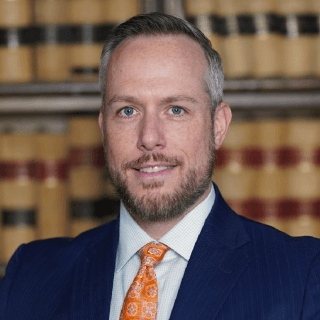 Mike Wilson has devoted his career to protecting his clients, whether those clients have been charged with a crime or have been damaged by either negligence or intentional bad acts. Mike represents clients in criminal trials in both the State and Federal Courts, defending clients charged with everything from misdemeanors to murder. Of note are Mike’s results in the field of criminal appellate and postconviction practice, where he has obtained new trials for clients convicted of serious felonies, including both attempted murder and first-degree murder. Mike has argued many of these appeals before the Nebraska Supreme Court, the Nebraska Court of Appeals, and the Eighth Circuit Court of Appeals. As a member of the Nebraska’s Regional Advisory Board for the Midwest Innocence Project, he works to obtain and support the exoneration and release of individuals wrongfully convicted in the Midwest.

Mike earned his B.S. from the University of Nebraska at Lincoln before accepting an academic merit scholarship to attend the Michigan State University College of Law, where he graduated in 2005 with Honors. While in law school, Mike served as a law clerk to the Hon. William Whitbeck, Chief Judge of the Michigan Court of Appeals, and as an Associate Editor of the Michigan State Law Review. Prior to joining the firm, Mike worked as the Executive Director of First Defense Legal Aid and as an appeals attorney at the Chicago branch of the Office of the Illinois State Appellate Defender, where he argued felony appeals before the Illinois Appellate Court.

When he is not working hard for his clients, Mike enjoys coaching soccer and softball, attempting to play golf, and taking down the occasional pot in a friendly poker game.

Due Process for the Past Due: A Legal Aid

Berry Law Firm has provided quality counsel and trial representation for its clients since 1965. If you are facing criminal charges or dealing with an injury, contact our team of...

Founded in 1965, Berry Law Firm has been fighting to protect the constitutional rights of clients for decades. Thousands of clients have trusted us with their cases and, more importantly,...