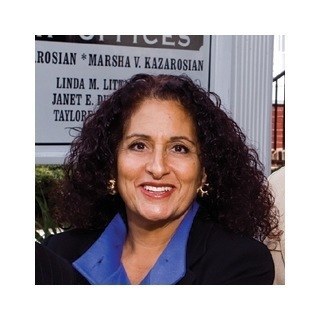 Currently the President-elect of the Massachusetts Bar Association, Marsha Kazarosian, has been named by Massachusetts Super Lawyers magazine as one of the top lawyers in Massachusetts for the 8th consecutive year. She has been identified as one of the top 50 Women Lawyers in MA and New England and a Super Lawyer in both Family Law and Personal Injury Litigation. In 2006, she was the Massachusetts Super Lawyers magazine’s cover story, featuring her career biography and her climb to national recognition. She enjoys a 10.0 Superb rating from AVVO, and is Martindale-Hubbell AV Rated. In January 2014, she was joined in practice by Walter A Costello, Jr., of Salem MA and Kathleen M. O'Donnell of Lowell, MA. All three are past president's of the Massachusetts Academy of Trial Attorneys. Attorney Kazarosian has been involved in numerous high profile criminal and civil cases, including the Pamela Smart murder case in NH, the landmark Haverhill Country Club discrimination case in MA, and most recently has set precedent in Dodd-Frank Whistleblower Retaliation matter in the US District Court.