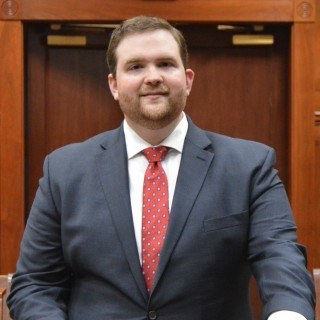 Tyler Carey grew up in Athens, Ohio and moved to Augusta, Georgia for college where he attended and graduated from Augusta University. During his undergraduate studies, Tyler was a member of the Student Conduct Board, as well as awarded the Who’s Who Among American College Students from Universities. After Augusta University, Tyler moved to Loganville to attend Emory University’s School of Law.

During Tyler's first year of law school, he interned for Bryan Frost which sparked his desire to help those overwhelmed by the legal system.

During his time at Emory, Tyler helped write am amicus curie brief to the United States Supreme Court in V.L. v. E.L on the importance of finality and stability in adoptions. The Supreme Court overturned the Alabama Supreme Court who had said a Georgia court erroneously applied Georgia adoption law to a homosexual couple. The Supreme Court thus said each state must give full faith and credit to all adoptions, regardless of sexual orientation.

During law school, Tyler had hands on experience with catastrophic losses from tractor-trailer wrecks, medical malpractice, premises liability, and negligent hiring. Tyler has a wide range of experience in criminal defense cases; from disorderly conduct to armed robbery, Tyler has helped his clients receive their fair trial, and has held the criminal justice system accountable to their burden. Tyler has also helped many clients in their domestic cases. From divorce, child custody, child support, and contempt.

When not practicing law, you can find Tyler on the golf course, at the movies, or spending time with his wife, two children, and chocolate lab - Clara.

Q. My son's father has always been absent but now pays child support. Does he have rights?
December 31, 2018
A: It sounds like you and the child’s father were never married. He would have standing to file a legitimation action to establish visitation and custody. Depending on how old the child is and how long he has not made any contact you may have a strong argument for custody and supervised visits, or abandonment.

Q. My daughter's mother and I had a verbal agreement regarding financial support and visitation. Never court ordered.
December 13, 2018
A: Until you have an order legitimating you as the father of the child, you have no rights to your daughter (visitation, child support, etc.). With you filing for legitimation, that is the first step in getting an established visitation schedule. The current verbal agreement is less important than what the actual practice has been (e.g. orally you guys agreed to every other weekend, but in practice in is really more every weekend). The visitation that has actually gone on will set a precedent for what both parties are comfortable with, at a minimum. If you are filing your legitimation pro se, I caution you to proceed any further without representation. If you do have an attorney, these types of questions can be directed to him or her.

Q. Can a mother of a child give 30 day relocate, moving the child because wanting to be with her boyfriend?
December 13, 2018
A: Generally, yes. Each settlement agreement or final divorce decree is different but most spell out one spouse must give their former spouse 30 days notice. Most of the agreements are silent as to the non-relocating spouse having to AGREE to the relocation. Moving in with a new boyfriend may be grounds for a modification of custody, BUT, it is critical you consult a local attorney to fully evaluate all the facts and circumstances of the case. Best of luck!