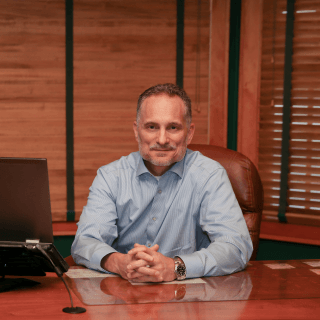 Dan Patrykus is a 1980 honors graduate of the University of Wisconsin-Eau Claire, a 1984 graduate of Marquette Law School, and a 1985 graduate of the National College of Criminal Defense Trial Institute at Mercer Law School in Macon, Georgia. From 1984 to 1992 he served as an Assistant State Public Defender in the agency’s Milwaukee Trial Office, where he conducted numerous homicide trials. One such trial, State v. Wirth, spanned six weeks. A later homicide trial, State v. Felton, was featured on Court TV. In 1994, Dan represented Christopher Scarver for the murder of Jeffrey Dahmer. In 1992, with Doug Keberle, he founded the Law Offices of Keberle, Patrykus & Laufenberg, LLP. All of his cases are now injury related. He has conducted well over 50 jury trials. Dan has been recognized by attorneys and judges across the state as a Wisconsin SuperLawyer in plaintiff’s personal injury. Dan was also named among the top 100 trial lawyers in Wisconsin by The National Trial Lawyers. Dan has lectured on trial topics for the State Bar of Wisconsin, and arbitrates injury cases at the request of other attorneys. He formerly served on the board of directors for “Friends of Abused Families Inc.”, a Washington county non-profit shelter for victims of domestic violence. Dan has coached YMCA football, Little League Baseball, and Club Basketball. He has zero tolerance for the powerful harming the powerless. He enjoys reminding insurance companies that providing full and fair compensation to those injured by the negligence of others keeps our communities safe. He resides with four wonderful teenage children and the most patient woman in the world, Michelle.